For many, remote working has brought on new issues. For one, many have noticed that wearing earbuds all day has highlighted the amount of earwax they have. EW! Have you noticed your earwax more than usual? What is earwax anyway? How can you prevent an earwax blockage (hint: don’t use a Q-tip!) and what does the color of your earwax mean? Let’s talk about this kind of gross, kind of weird substance that we all have in our ears.

Earwax, also referred to as cerumen, is a thick, waxy substance produced by the ear to protect and clean the canal. It helps block the canal, preventing dust, bacteria, and other particles or objects from entering, as well as coats the delicate skin, protecting it from water and moisture. Earwax also cleans the canal by picking up any stray hairs, dust and bacteria that it naturally funnels out of the canal as you chew and talk. It can sometimes be seen as lumps or clumps in a range of colors as the edge of your canal or at the tip of your ear buds!

According to Harvard Health, tests have shown that cerumen has antibacterial and antifungal properties and that if your ears don’t have enough earwax, they’re likely to feel itchy and uncomfortable. So earwax is part of a healthy ear! Let’s talk more about your earwax.

Cerumen (aka earwax) comes in many colors. Remember, wax is healthy so don’t panic! The color of your earwax can vary: 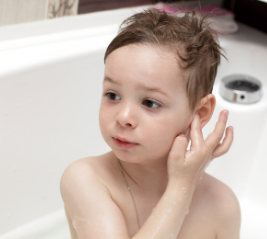 Earwax can pile up and cause a blockage or embarrassing clumps of wax in your canals. In this case, you may notice lots of wax, a thicker darker wax, or feel like you have muffled hearing at times. Blocked ears due to wax usually do not have pain as a symptom and the muffled feeling shouldn’t last long. Some people just naturally have more cerumen than others, and some people with wax blockages have them because they block the wax from naturally cleaning itself out by using earbuds or poking q-tips in their ears.

Using a Q-tip or earbuds can actually push that wax back into the canal. If you are someone that naturally has lots of wax, this can cause a backup rather quickly. It is important to try and give that wax a chance to move on out naturally! If the wax can’t get out on its own, it will continue to be produced by the body and ultimately get backed up, sometimes hardening in the canal.

Those that wear hearing aids often have wax blockages, as the hearing aid blocks the wax from naturally moving out of the canal. It is important to keep an eye on the wax, especially with daily hearing aid use. Wax can damage your hearing aids so be sure to check them for any clumps of wax.

Another cause of earwax buildup is thought to be related to age. The elderly tend to have problems with earwax buildup. As you age, you tend to develop more wiry, thicker hairs in your ears, which traps more wax. This trapping of wax can cause the wax to build up and cause bothersome blockages.

Side effects of earwax

Too much earwax can be bothersome, but it can also become a real problem. Besides the obvious effect of muffled sounds, blockages can cause earaches, infections, and other problems such as loss of hearing. According to Harvard Health, if the wax gets lodged in a certain way, it can cause a cough by stimulating the branch of the vagus nerve that supplies the outer ear.

It is important to see your provider or specialist for your earwax problems if you are also experiencing any of the following symptoms:

Chat with a nurse first if you are unsure about your symptoms or are having any pain.

How to treat an earwax blockage

Soft earwax is easier for the body to naturally remove. Sometimes just simply rinsing your ears in the gentle shower stream is enough to dislodge earwax. Wiping the outside edge of the canal is ideal.

Q-tips often pack the earwax back in, especially when the ear is full. We generally recommend to avoid Q-tips! As good as they may feel, letting the wax out is the best option. Free that earwax!

In some cases, you will need to use an earwax softener such as Debrox drops, mineral oil or another softener. If you are not having pain and have no history of ear problems, you can also add a few drops of hydrogen peroxide and water into your tilted ear. After letting it sit, you can then tip your head to see if the wax will drain out. You can then let the gentle shower stream rinse the ear or use a bulb syringe to gently flush the ear. If you experience any pain or attempts to flush is unsuccessful, you may need to see a healthcare provider.

Hopefully you are successful and a great big lump of wax pours out and your blockage resolves. Once that happens, don’t wait for your earwax to back up again. Give your ears a break from your earbuds, rinse them in the shower (your ears that is) and wipe wax with a tissue instead of packing the wax back in with Q-tips!

Still have questions about your earwax or another general health question? You can chat with a nurse within seconds if you are unsure about your symptoms or experiencing any pain. Nurse-1-1 is here to help!

The opinions expressed in Nurse-1-1 Health Center Blogs are solely opinions of the writer. Other than information received directly by you from your personal provider, the health center blog should not be considered medical advice. Read more.